I have frequently observed that weekend news shows, especially on local channels, are likelier to produce unforced errors than those during the week. Cameras can switch from  one reporter to another who is not expecting to be "on," and misspellings are all too common.
I'm seeing a similar phenomenon on foxnews.com over the weekend. 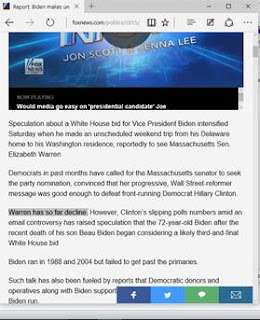 Today, in an article about potential Democratic presidential candidates, the second and third paragraph read (my emphasis added):


Democrats in past months have called for the Massachusetts senator [Elizabeth Warren] to seek the party nomination, convinced that her progressive, Wall Street-reformer message was good enough to defeat front-running Democrat Hillary Clinton.

Warren has so far decline. However, Clinton’s slipping polls numbers amid an email controversy has raised speculation that the 72-year-old Biden after the recent death of his son Beau Biden began considering a likely third-and-final White House bid.

In an article posted yesterday (and still highlighted on the home page today; emphasis and CAPS added), 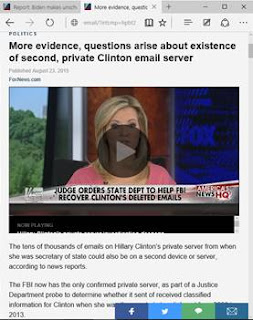 The FBI now has the only confirmed private server, as part of a Justice Department probe to determine whether it sent OF received classified information for Clinton when she was the country’s top diplomat from 2009 to 2013.


Both examples are typical of spell-checked text which misses such errors since both are legitimate words. What about grammar-checked? Word 2010 doesn't catch either error, but Google Docs implicitly catches "decline" asking, "Did you mean: declined?" and explicitly, providing via Tools>Spelling..., "Change decline to: declined." Google Docs does not catch "of."

There are so many comments on each of the articles that I don't know if other readers caught the typos. Anyway, it is the weekend, after all. (Blogger provides only spell-checking, not grammar.)